Citadel Securities capped off a banner year for industry awards by receiving top honors from IFR, Risk Magazine and Futures & Options World over the past several weeks.  The firm won 13 awards this year, with recognition coming from a wide range of publications, including Risk Magazine, Global Capital, Markets Media, FXWeek and Profit & Loss.

Read more about the Risk, IFR and FOW Awards below. 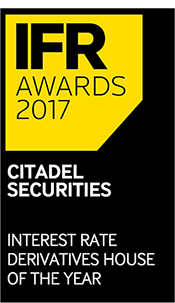 Citadel Securities was named Interest Rate Derivatives House of the Year. IFR applauded Citadel Securities for “stepping up with an ambitious plan to redefine the voice-traded world of customized swaps while maintaining its commitment to firm, tight and consistent pricing.” The article also quoted several clients, who praised the firm for being proactive in servicing client needs and offering an exceptional client service experience. Read the full story here.

The IFR Awards honor excellence in the capital markets and have traditionally recognized the most successful investment banking firms. IFR’s editorial team determines the winners following a process that involves a review of written submissions, verbal pitches and client references.

Citadel Securities previously won Interest Rate Derivatives House of the Year in 2015. IFR is hosting an awards dinner to celebrate this year’s winners on January 30th in London. 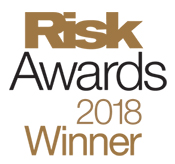 Risk highlighted Citadel Securities’ achievements in equities and fixed income. The rates story featured quotes from Global Head of FICC, Paul Hamill and mentioned that the firm has “kept its foot on the gas” in 2017 after experiencing a “meteoric rise” and becoming one of the top liquidity providers in interest rate swaps. The story also discussed the expansion of the firm’s U.S. Treasuries offering and particularly its success in off the runs this year, adding that this offering has helped Citadel Securities expand its client base and deepen relationships with existing clients.

The equities story, which quoted Head of Execution Services, Joe Mecane, noted that Citadel Securities continued to grow its retail franchise while other market makers have struggled. The story mentioned that the firm made several senior hires to support the continued build-out of the business, including Mecane as Head of Execution Services and Laurent Marquis as Head of Derivatives Trading. The story also cited blind bid auctions and block trades as new areas of opportunity in 2018.

The Risk Awards recognize businesses and individuals for their achievements and contributions to the derivatives and risk management industries. Similar to the IFR Awards, Risk Magazine’s editorial team selects the winners following a review of written submissions, research and interviews with senior market participants. The full list of winners is available here. 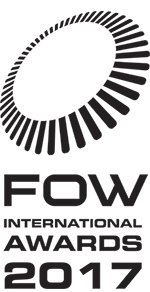 Futures & Options World (FOW), a London-based derivatives focused publication, named Citadel Securities Market Maker of the Year for the second year in a row at its annual International Awards. Citadel Securities beat out XTX, Optiver and Mako in this category. A number of Citadel Securities team members attended the awards celebration in London on December 6th, joining several hundred attendees from across the derivatives industry.

Winners were determined by an independent judging panel following the FOW editorial team’s review of submitted nominations and interviews with senior market participants. The full list of winners is available here.